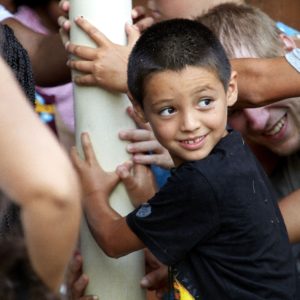 JoJo started going to camp when he was 7 years old. He really wanted to go because his older brother and sister had attended Camp previously. Both of them had come home with stories about how great it is. I (mom) found out about the camp through NM AIDS services years ago when they still had funding to reach out to people with HIV. The agency has had to downscale quite drastically the past few years. Other HIV positive parents may not even know about the Camp opportunity.

“Camp is an opportunity that I can hardly describe.”

As a mother with HIV I think Camp is an opportunity that I can hardly describe. I have lived with HIV for 32 years and have been around through terrible fear and discrimination that first confronted HIV in the latter part of the 1980s. Then the medicines and education came around and really gave people like me a chance to live. Though that has been a blessing as well as the compassion from society at large that replaced the fear, now I find that people with HIV seem forgotten. Camp gives our children a chance to get real knowledge of what they or their parents are going through. It offers education and acceptance that is rare in other places of society. It gives the children a chance to be noticed and appreciated for who they are as individuals.

When I ask my children what they like best about camp there is no one thing. They like the lake, playing gaga ball?, archery, climbing on things, and so forth. But the grandest thing that comes through is not the activities but the connections they make with staff and other campers. Little things like singalongs, taking their turn at kitchen chores, playing around in the cabins, and dressing up in ridiculous costumes provides those opportunities for the connection the kids crave. Those are the things that linger when Camp has ended.

JoJo was studying the sexuality lesson at his school this year. His teacher brushed over HIV/AIDS. JoJo raised his hand and told the entire class his mom had AIDS. I got an email from his teacher because they thought he was trying to get some attention by saying that. I told his teacher it was true. I think the teacher was shocked. I don’t think JoJo would have done something like that without the camp. I was a bit nervous about what kids would say. My older son had dealt with discrimination in the past. Once I had done some public speaking in what I thought was a remote area. Little did I know somebody wrote about it in a small publication. Then a parent from my son’s basketball team read the publication. There was a big deal going on when I showed up with my son to basketball. Everyone knew and some parents were concerned about us being there. Fortunately, it was different this time around. The teacher showed he was educated, understanding, and discreet.

Sometimes I wish I could receive services from an AIDS agency but we don’t qualify with our income. But, my kids have been able to go to Camp which has been better than any service I could ever get. To see them come home happy with shining eyes is worth more than anything in the world. Camp has become for my older two as it will with JoJo; a summer memory that will last a lifetime.  My oldest son is independent and living out of state on his own. We talk about many things. When camp comes up there is always a lilt in his voice and a rush of fond memories.

I don’t know what my kids think about growing up with a mom with AIDS. They just see me as a typical mom. I do know Camp gives them a gift in confidence and connection that is worth more than anything I could ever imagine. It is a blessing and I am glad all three have been able to experience it.

Team up with One Heartland! Raise money to send kids to camp and rappel down a 24-story building in Minneapolis on June 23rd!